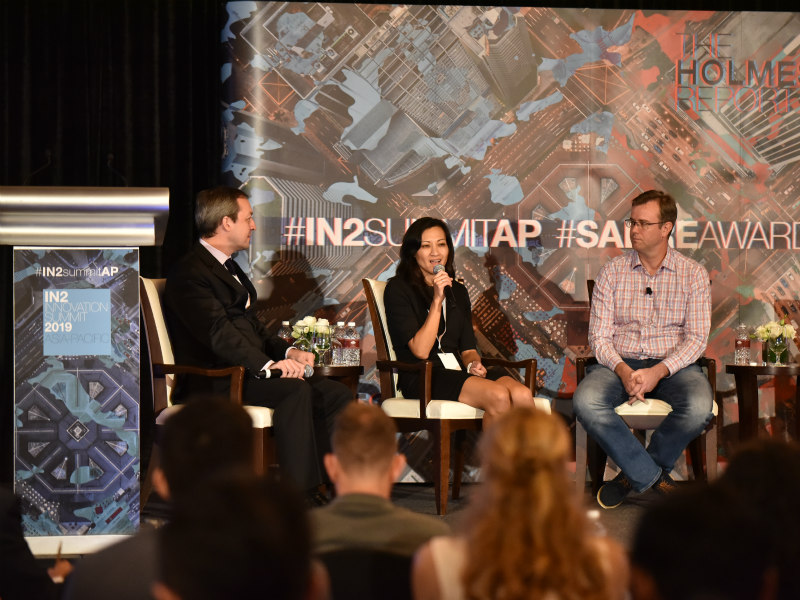 SINGAPORE — The in-house communications function can be a critical factor in how businesses successfully navigate organisational change, according to speakers at the In2Summit Asia-Pacific this week.

Morrison – who is also a board member of the Asia-Pacific Association of Communications Directors (APACD), with which the Holmes Report recently unveiled a wide-ranging partnership – said the traditional energy industry was going through enormous change: “The introduction of renewables has changed the dynamic of the entire sector, and we’re in a situation where we have new customers like Google and Tesla are taking responsibility for delivering their own power from their rooftops etc. It’s almost like the organisation has to go through therapy.”

At Vistra, Evans said the financial services industry was also going through huge, but different, changes, including the demand for transparency, secure data and regulatory change, as well as Vistra’s own rapid transformation, via a number of M&As.

She said technology was a key factor for communicators in a fast-changing environment: “I communicate with colleagues around the world on multiple platforms, covering the basics and staying on top of the organisation’s growing pains. We talk a lot about internal communications, about using less email, more video, how we can use Yammer or Facebook. I’ve gone through three CEOs in the year I’ve been at the firm, and people just want you to be real, honest and upfront about change.”

Evans added: “We have to make sure from a marketing communications standpoint that we add to the business strategy. One of the key things for us is the cultural journey we’re going on, with so many companies coming into one: since that’s a strategic business priority, we’re looking at internal platforms and way engaging employees with clear deliverables and metrics to measure it.”

Morrison said technology could help comms functions evolve, although he warned of the dangers of chasing the latest “shiny penny”: “We made a mistake and jumped in too early on marketing automation ahead of what the business was ready to do, and it didn’t turn out well. You might have loads of tools, but do you understand the processes? Is the culture in place and the workforce ready to receive that technology and make it effective? As we’ve learned, it’s all about setting the right foundations.”

Both speakers said creating stories from employees was an effective tool in communicating internally and externally about change in already-complex industries. Morrison said Black & Veatch had rolled out an internal storytelling mechanism to unlock stories that would resonate with potential new market sectors, such as the company’s role after the Thai boys’ football team crisis in providing the testing mechanism that made sure they had not contracted any diseases while they were trapped in the caves.

Morrison said: “It meant we could tell governments that they could trust us with critical, failsafe projects. It’s about understanding the biggest impact you can have, and using your brand ambassadors to connect to the human side of what you do.”

Evans said finding the right internal ambassadors and external influencers to tell corporate stories was trickier in a highly-regulated industry: “We have to be disciplined about what we say, but telling stories internally – such as one lady in our wealth business who gets invited to graduations and family occasions because she’s built relationships with clients and been with them on their journey – is way more powerful for employees than a celeb influencer. It’s about finding the personal touch, especially in a company going through so much change.”

Summit delegate Gavin McDougall, director of public affairs at the Australian Consulate-General in Hong Kong, added that internal storytelling about an organisation’s impact didn’t just have to come from employees or influencers.

McDougall said that in 2011 when Australia introduced passports with a third gender option of X, to indicate that the holder preferred not to be identified as male or female, the first passport holder came in to talk to the passport office staff: “He had been through gender change and came to talk to our staff. They were really moved to hear about how their processes had changed his life, because the passport was the first document he’d ever had that didn’t say he was female. These stories can come from ordinary people to whom you’ve made a difference.”

In answer to a question about how to communicate less positive aspects of organisational change internally, such as retrenchments and redundancies, Morrison said the key was honesty: “Tell people clearly what’s going on. Change can be really scary and the first thing people think about is their job. There’s a lot of internal noise about change, but we need to keep talking, keep listening, bringing people on that journey and reassuring them about what we are trying to do. It’s really important that the comms function is not bullshitting, that we treat people like humans and tell them the truth.”

Evans added that rather than simply produce internal messaging and FAQ documents, the comms team should prepare face-to-face with managers who need to deliver news about change : “With managers who are managing change day-to-day with their team, sit down and have a conversation with them, rehearse how they will deliver messages and handle the tough questions, rather than just sending out a toolkit.”

In terms of what in-house communicators need from their PR agencies in times of change, Morrison said: “We need good relationships and trusted advisors, so you need to be honest with agencies too, and build trust, so even if what we need is technically out of scope, we can work on a solution.”

Evans said that she looked for help from agencies in areas where she was lacking: “I’m looking for a heartbeat on what’s happening in our industry, and for them to flag what’s trending and relevant. I also want to know how to use content in a more effective way and get stories out of our subject matter experts’ heads, working together as one comms team to deliver engaging content and strong media relations.”