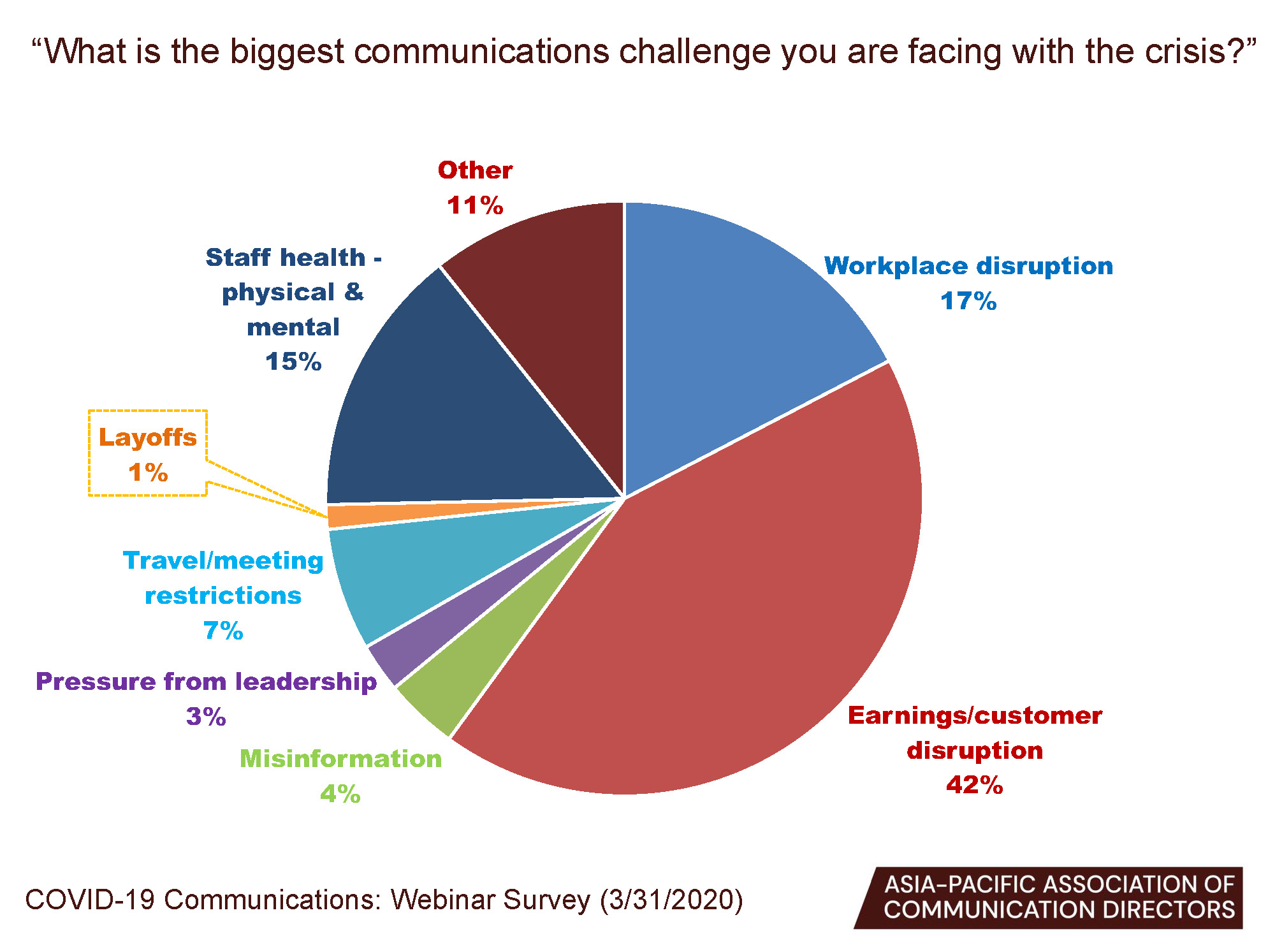 It is no exaggeration to say that the Covid-19 crisis has caught just about every organisation, from government bodies to the world’s largest corporations, severely off guard. At the same time, it offers a valuable learning experience and is a chance for communications functions to emerge stronger and better prepared to deal with future calamities.

To understand the issues in further detail, the Asia-Pacific Association of Communication Directors (APACD) held a webinar last week attended by 140 in-house executives from across the region. The session was underpinned by attendee surveys conducted via audience interaction platform SparkUp. The pre-event findings from this research found 54% of communications leaders “somewhat prepared” for the crisis; 17% claimed to be “very prepared”, while 24% were “neither prepared nor unprepared”; 5% admitted to not being prepared at all.

In a webinar to discuss these and other findings, Adrian Warr, Edelman’s chief executive for Hong Kong and Taiwan, noted that the “truly global” nature of Covid-19 made it especially challenging. “Very few crises actually are global,” he said. “It’s completely cross category and affects absolutely everyone in every industry but it’s also unique in that it’s a rare crisis that has both very high density and impact but also longevity.”

With the virus far from being under control, Warr expects the coming months to throw organisations into “new territory” longer term in their engagement with employees, communities and consumers. “All of those things are dramatically changing and I don’t think we’re prepared for that. I’ve not come across any businesses yet that have said they are comfortable with those much bigger changes.”

Even in mainland China, the seriousness of the situation hit people late in the day, says Lydia Lee, Weber Shandwick’s president for the country. In the scramble to catch up, she says the most important response has been to listen—to employees and to the market, and use that to model and prepare for a wide range of possible scenarios.

Rachel Catanach, senior partner and Greater China president at Fleishman Hillard, thinks that once the situation eventually passes, people will wonder why institutions weren’t better prepared to deal with a global pandemic. “Why wasn’t more done to prepare for a scenario that seems obvious that it was likely to happen at some stage,” she said. “It goes back to the old adage: we all have to prepare for the absolute worst as communications experts… As a profession we need to be thinking about the worst case scenario all the time and preparing for that.”

For Warr, a sense of realism is still lacking. He has not spoken to a client who has simulated a reaction to a crisis with staff under remote working conditions. He does not think businesses are prepared to deal with cyber security threats under these fragmented working conditions either. “It’s not just the Covid-19 crisis that’s going to damage businesses,” he warned. “It’s all the other crises that happen while Covid-19 is happening.”

The survey supported a general sense in the industry that employees are still top priority in terms of stakeholder communications: 49% said they were, with customers next at 39%. Lee said it reflected wider emphasis on employee engagement. But Catanach noted that it’s also easier to focus on employees “because that’s what you can control. They are a target audience that is easily within your grasp”. 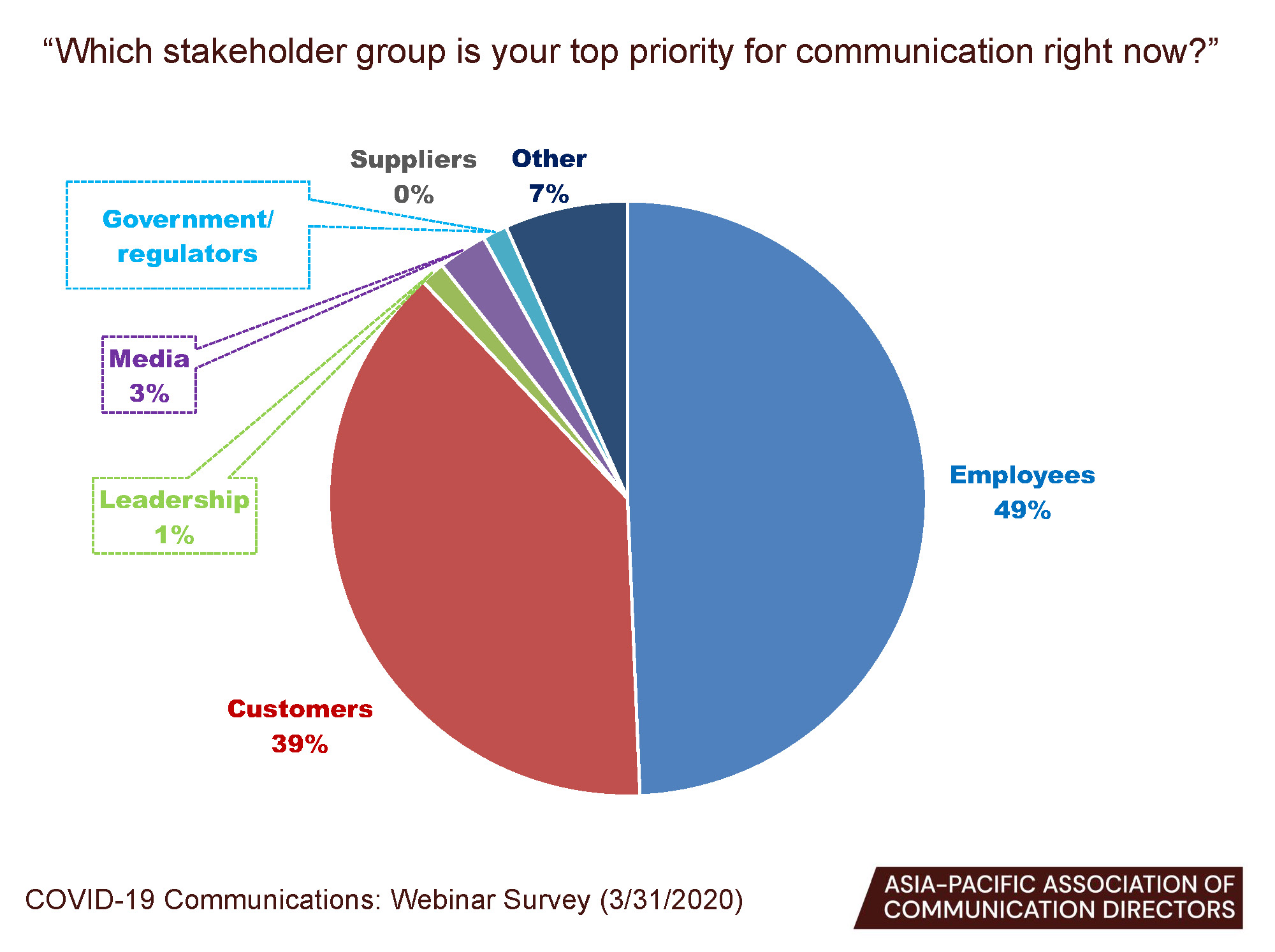 At the same time, remote working “can undermine our efforts to foster a culture of collaboration,” Warr said. Reliance on written communications, especially via messaging platforms, can make it difficult to read emotional nuances. “Our ability to express ourselves is stripped down to its bare minimum. Moreover, silos and sub-groups can form more easily in the various online tools we use, and barriers are easier to raise. All this, if not managed can create ambiguity, friction and conflict.”

Warr added that conflicts also tend to go unresolved. “These challenges have to be brought out into the open and dealt with for teams to stay collaborative. Team charters with new principles and processes can help.”

Externally, many companies “are still wondering how and when to communicate”, observed Catanach.

“They’re wondering, how do they really support the community, how do they show beyond their traditional CSR efforts that they’re trusted… how do they also begin marketing to their customers and not make missteps like some brands have by mistaking the tonality that may have been appropriate in other times but isn’t now.”

Indeed, the earnings and customer disruption is seen as the biggest communications challenge (42%), followed by workplace disruption (17%) and the physical and mental health of staff (15%). Warr sees this as a longer-term concern: the crisis has heightened existing anxiety in the business world, especially in politically troubled Hong Kong, and communications people are likely to be “at the pointy end of the spear”.

“They have to deal with the communications plan, the marketing plan, to explain to the world how the business might be downsizing or operating in a different way,” he said. “So I think that earnings and customer disruption is a very natural effect of where we are now which is fear for the future.”

Lee said the only way to deal with customer and earnings disruption is to be transparent while paying attention to the reality of the situation in individual markets and managing expectations accordingly. But while it might appear that China is returning to business as usual, Warr urged caution. “A lot of people are assuming that you just return to business as usual and I don’t think it will. I think you are going to go back to business as very unusual. I think the consumer buying patterns, consumer habits, mindsets, supply chains, everything is going to be very different. The ‘return to normal’ I don’t think necessarily exists.”

Taking into account the multiple challenges that obviously exist, the finding that 73% feel they are meeting the expectations of key stakeholders might come as a surprise. But what exactly are those expectations? 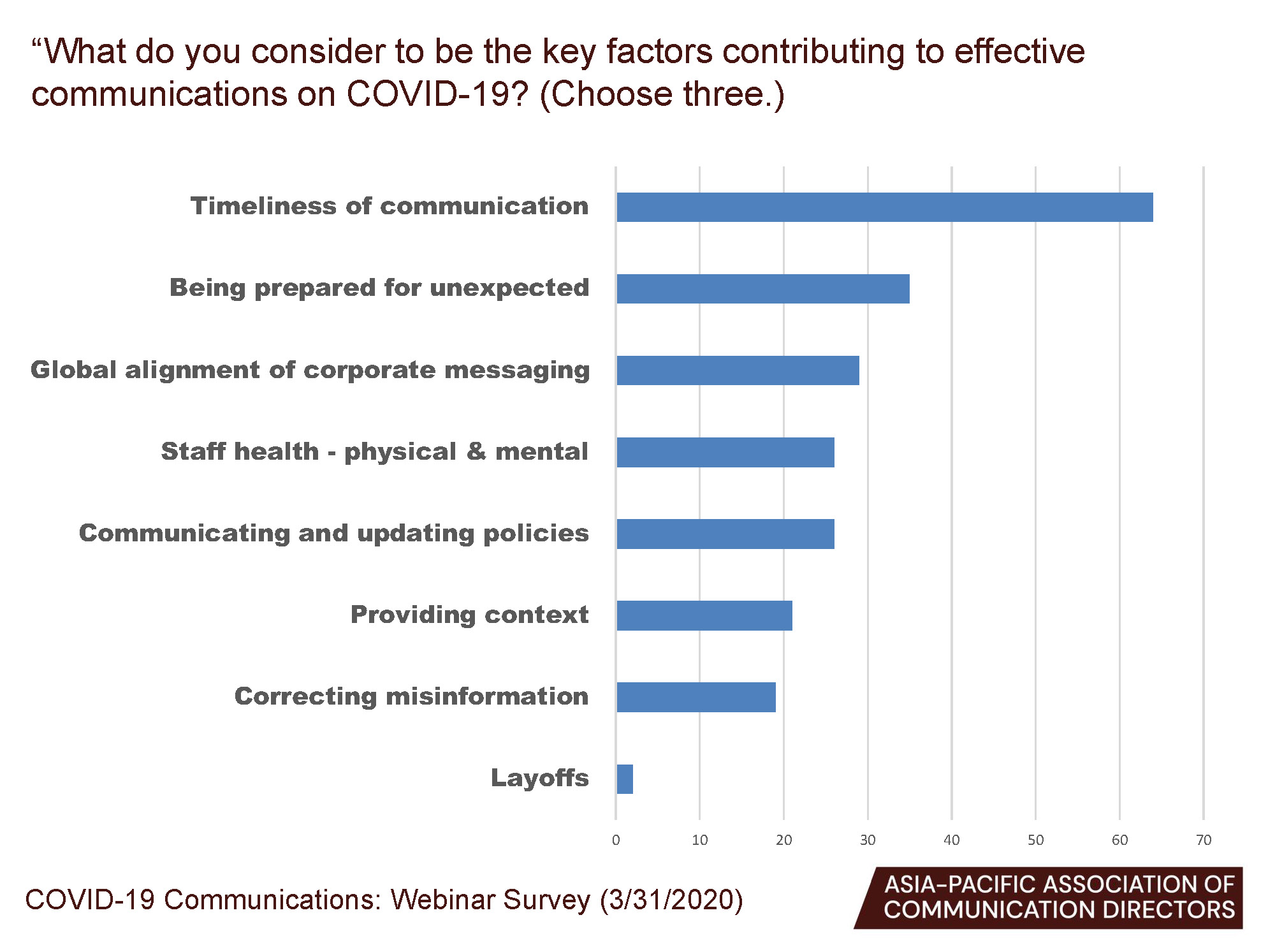 Most respondents think timeliness is the most important factor for effective communications, followed by being prepared for the unexpected, and the global alignment of corporate messaging. If one defines expectations “in terms of process and the immediacy of your response, i.e. the effort you are putting in, then I think most people are meeting expectations,” said Catanach. But she thinks expectations will change, and that the various stakeholders will look back at what has been done with a critical eye.

“For communications professionals it is a real time to be at the front line and to demonstrate the value but also the long-term strategic thinking that we can bring to bear,” she said, adding that the situation calls for more perspective, ability to discern valuable information, and guidance to leadership than ever before.

Warr thinks that global alignment and well thought-out corporate messaging will become more important than speed of response. “Providing context is absolutely massive in terms of redefining how you are going to talk about your brands to consumers or to business audiences,” he said.

That doesn’t mean flooding inboxes with coronavirus-related corporate emails. Companies would do well to think twice whether what they have to say is truly meaningful, Catanach noted. “Too much information is not advantageous to the situation… I would counsel to be careful with your communication and really have a unique perspective to offer that is relevant to the moment.”

Media relations is currently a low priority, which Catanach attributes to the fact that Covid-19 already dominates news coverage. She thinks this will change as the media in markets where the situation shows signs of lifting become interested in topics beyond the immediate crisis. Warr cited a study by his company that indicated public trust in media information on the situation was low compared to that in employers.

Catanach said she expects a new set of influencers to rise up, in particular medical experts. They “will become probably the best predictors of the market going forward and so they will have an enhanced role in our communications”, she said.

The crisis could help make the communications function better respected within companies. Lee bemoans the fact that communications is still often an afterthought, except when there’s a crisis. With the operations of many businesses on hold, “all you can do is communicate. So communications definitely have taken a much more central role”.

Still, there is a chance that budgets might be cut due to the impact of the virus on business, noted Azmar Sukandar, APACD president and head of communications and society for Asia-Pacific at Diageo. “So to be honest, we are furiously planning and trying to spend the money now because we really think that it will happen.”

Not knowing when the crisis will end puts communicators somewhat in a state of limbo. How to move forward? Both Catanach and Warr advise using this uncertain period to prepare for an equally uncertain future. “Desperately trying to write a perfect plan now of how to get through this and how to recover I think is wasted time,” said Warr. “Listening, learning, trying to react and do the right thing quickly, and testing and learning, is the right way to go ahead.”

The webinar concluded with a vote as to whether the communications function will leverage the current challenge as a chance to reposition itself and strategically pivot, to which most participants responded affirmatively.

“I definitely think that we’ve got the opportunity to do it,” said Catanach. “We need to seize that opportunity.”